Anti-Icing: The Stripes That Keep You Safe

Anti-icing is a proactive approach to clearing snow and ice. Liquid deicers are sprayed on the roads before a storm.

Have you ever noticed white stripes on the road in the winter? These stripes are the result of anti-icing techniques that help snow fighters clear roads quickly after a storm.

Anti-icing is a proactive approach to maintaining winter safety. Liquid chemical (such as sodium chloride or magnesium chloride) is applied to roads, bridge decks and parking lots before a forecasted storm to prevent snow and ice from bonding to the pavement.

However, deicing is a much more common winter maintenance strategy. Salt (or another chemical) is applied during or after a storm to melt snow and ice. The trucks that plow the streets and spread salt after a storm are de-icing.

Why Anti-Icing Should Become a Common Practice in Winter Maintenance

Anti-icing is the most cost-effective and environmentally safe practice in winter maintenance.

Anti-icing applies stripes of liquid chemical to roads and parking lots. Liquids work better than solids at preventing and breaking the bond between ice and pavement. Also, liquids stay on the road instead of bouncing off like solid rock salt often does.

Anti-icing applications can last for several days and are effective in preventing frost, especially in troublesome places like bridge decks.

According to Minnesota Pollution Control, anti-icing is 1/10 the cost of standard deicing strategies.

Anti-icing is a time and labor-saving strategy, which can drastically cut costs. Application is quick and can be done during normal working hours, which reduces expensive overtime costs. After a storm, clean-up is much faster since anti-icing prevents snow and ice from sticking to streets.

Also, anti-icing requires ¼ the material of deicing! Less salt is needed to prevent ice from bonding to pavement than is required to break the bond after a storm.

There is also less wasted material compared to deicing. As cars drive over an anti-icing application, the liquid material gets into tire treads and spreads to other streets, parking lots and driveways. So, the chemical goes where it’s needed, reducing waste and costs.

Anti-icing is a Salt Smart approach to winter maintenance—we can keep the roads safe while reducing costs and environmental impact!

What to Consider Before We Switch to Anti-Icing

Since anti-icing is done before a storm hits, application depends on weather forecasts. While anti-icing is effective for forecasted weather events, storms cannot be predicted 100% of the time.

A combination of anti-icing and deicing can be used for maintaining safe roads. When a storm is forecasted, anti-icing should be the first step in a snow and ice removal plan. Snow and ice will have a hard time sticking to the pavement because of anti-icing, so less salt for deicing can be used after the storm. This should require less material overall. Using less salt means that less chlorides end up in our rivers!

All in all, anti-icing stripes keep us safe on the road and protect local rivers (and our freshwater fish friends that live there) from too much salt. 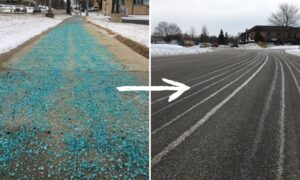 Lose the Crunch, Love the Lines: Why We Need to Adopt Anti-Icing

The crunch of salt beneath our feet in the winter is not without a cost. Instead of wasting salt, we can adopt a snow removal practice called anti-icing to reduce costs and minimize impact on the environment. 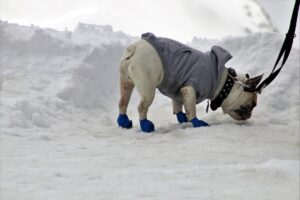 The salt on sidewalks, parking lots, and roads can help keep us safe from icy patches in the winter time, but salt isn’t good for 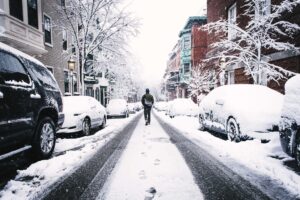 The Scoop on Road Salt: How Chlorides Impact the Environment

Road salt is an important tool for maintaining safe roads, but it has negative consequences for the environment, plants, and infrastructure.