A native buffer, or strip of native vegetation, can be added around the shoreline to restore a deteriorating detention pond.

No one wants to deal with a flooded basement or maneuver around submerged streets after a storm. Unfortunately, the risk of flooding increases with suburban development—native vegetation, soil, and landscape depressions that store stormwater are replaced with impermeable surfaces such as roads, parking lots, and rooftops. Rainwater easily runs off these surfaces, putting more strain on our waterways and stormwater infrastructure.

5 benefits of adding a native buffer to a detention pond

Shoreline erosion can cause nutrients such as nitrogen and phosphorus, which are naturally found in soil, to be introduced into a detention pond and lead to algae bloom. A native buffer, made up of native plants with deep root systems, reduces the risk of shoreline erosion by stabilizing the soil.

Native buffers also reduce the amount of chemicals, such as herbicides and pesticides, from entering the detention basin (and eventually downstream bodies of water) through stormwater run-off. Native plants, well adapted to local environmental conditions, do not require the use of herbicides or pesticides.

Having a native buffer around a detention pond also decreases the amount of mowing required. Grasses should be allowed to remain long around native vegetation to create a dense buffer, reducing the amount of chemical run-off into the detention basin.

Having a native buffer serves as a barrier to discourage pesky wildlife, such as geese, from lingering around the detention basin. The buffer also works to reduce the amount of animal waste that is introduced into the detention basin. Animal waste contains bacteria and nutrients which will run-off into ponds and deteriorate the water conditions.

5. Adds aesthetic value to the neighborhood

A native buffer creates a beautiful aesthetic environment for the community while adding the beneficial factors of keeping the waterways healthier. A beautiful and well-maintained detention pond can also increase property values. 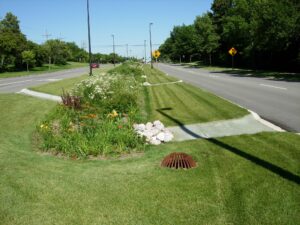 Bioswales are a type of green infrastructure than can be integrated into urban and suburban neighborhoods to help manage stormwater. 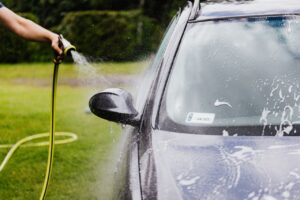 How Washing Your Car at Home Impacts Waterways

Be mindful when washing your car at home. The dirty car wash water can flow into storm drains and contaminate local rivers and streams.

Capturing rainwater in a rain barrel gives us clean water to offset household water usage and reduces stormwater running off our property.