Critters in Our Waterways: Meet the Freshwater Mussel

Freshwater mussels, sometimes referred to as clams, are an important part of our aquatic ecosystem. From the outside they can easily be mistaken for a rock on the bottom of the stream, sometimes partially covered in algae.

Inside the shell is where the magic happens—freshwater mussels are like miniature water filtration plants. They feed on the plankton they filter out of the water, but also filter things like bacteria and detritus, before returning clean water back to the stream. A mussel can filter up to eight gallons of water per day! This form of feeding by filtering river water also makes them very vulnerable to water pollution, which in-turn makes them good indicators of water quality. In other words, finding mussels in a stream is a sign of clean water.

Unfortunately, we have lost nearly 80% of the freshwater mussel species that were once found in the Des Plaines and DuPage River watersheds. As adults they are confined to a small stretch of stream, so unlike fish and other aquatic insects, mussels cannot move away from poor water quality. Mussels are particularly sensitive to levels of chloride and ammonia in the water, both of which are at higher levels in more developed areas.

Fortunately, the story is not all doom and gloom for freshwater mussels. There are many ongoing efforts to improve water quality through restoration projects like dam removals and habitat improvements as well as implementing smart salting practices to reduce the amount of salt being used to keep our roads safe and improving wastewater treatment plants.

Another exciting resource in our region is the work being conducted at the Urban Stream Resource Center, operated by the Forest Preserve District of DuPage County. They are leading efforts to study, raise and release native freshwater mussel species back into sections of stream after restoration projects.

Finding Love and Raising Young Without Fins or Legs

In case you are still not impressed by the humble freshwater mussel, take a look at how they have overcome a major downside of their limited mobility: how to find a mate and move young to different parts of the stream. Although different species of mussels have developed their specific manner of mating and dispersing young, they all follow the same approach.

To mate, male mussels release sperm into the open water. Females lay eggs and store them in specialized chambers in their gills. As the female draws in water containing the sperm, the eggs are fertilized.

Next, female mussels use a fleshy “lure” that attracts fish to come close and potentially grab on. When a fish falls for the decoy, the mussel expels glochidia (larval mussels) that then attach to the fish’s gills for a few weeks. These larvae absorb nutrients from the fish and hitch a ride to new areas of the stream. Finally, the juvenile mussels drop off and settle into a new section of stream to continue their life cycle. Some species of mussel use a range of fish species while others only target a specific species. Some lures wiggle at the edge of the shell, while others extend well into the water.

Through these innovative strategies, reproduction “without moving a mussel” is achieved! Freshwater mussels are amazing creatures and are truly an important part of our aquatic ecosystem. 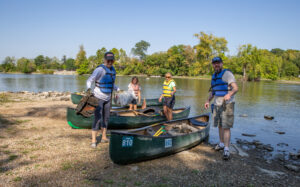 Preparing to Paddle: How You Can Be River Responsible This Year

We want everyone to enjoy the rivers in their communities this year, but that can only happen when we are all River Responsible! 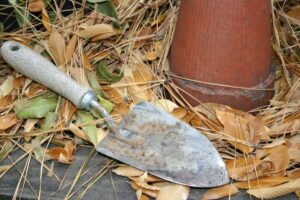 Garden Refresh: How to Clean Up Your Native Garden This Fall

You have a few options when it comes to preparing your native plant garden for winter – either clean it up like a traditional garden or leave it be. 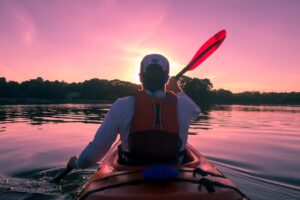 Planning a Day on the Water? Be River Responsible!

Before heading out for a day on the water, there are a few things to keep in mind to keep the river enjoyable and safe for everyone.